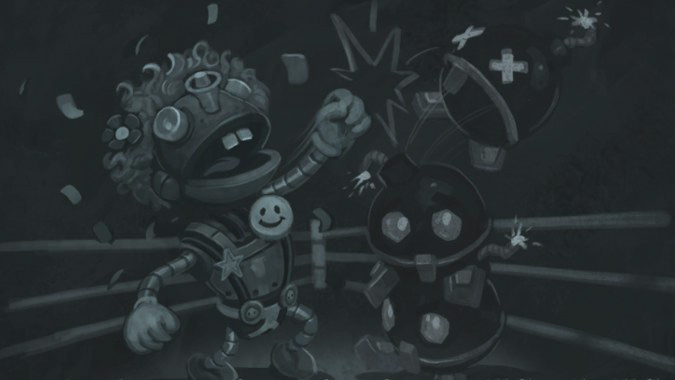 The 68th Tavern Brawl is the “Boom Bot vs. Annoy-o-Tron”, which is a repeat of an older brawl.
The hero power of the Boom Bot is to deal 2 split damage to random targets, while the Annoy-o-Tron’s is to give divine shield and taunt to the lowest attack minion from his board.

This brawl is mostly a tempo battle between the two heroes, the one who gets a good low curve is favored a lot. The Boom Bot doesn’t seem desperate to get the board as soon as possible, because he has a few comeback cards in his deck, such as the Mad and Madder Bombers, also some single target removals like Crush, Bomb Lobber and Flamecannon and the big board clears, Lightbomb and Twisting Nether, but he is forced to find the best curve because his board clears won’t be too effective If the Annoy-o-tron gets the divine shields on his minions. The Boom Bot is going to win the late game battle most of the time because he has the better big cards, noticing the master himself, Doctor Boom.

Annoy-o-Tron has to maintain the board in order to win, because it’s difficult for him to regain the control of the board once he lost it, his only board clear being the not so good Holy Nova. If he uses the hero power early in the game and gain tempo, with the help of the good weapons that he has, the Annoy-o-Tron has a very good chance to win the game, but it’s pretty hard to find a good curve with his deck because he has a lot of bad cards, like Blessing of Might, Power Word:Glory and Flying Machine.

This Brawl is pretty unbalanced, the Boom Bot having way better cards than his opponent and once the Boom Bot gets the control of the board is hard for the Annoy-o-Tron to change the fate of the game.

It’s a shame that they put the same cards this time as in the previous round of this brawl, which are 80% Goblin vs. Gnomes cards. Some of the newer cards could be added and give a more fresh looking to this brawl, or maybe a better idea would have been to adapt this type of brawl to other two characters, like Ragnaros the Firelord vs. Ragnaros the Lightlord or a battle between two pirates.

From the new player, playing with some cards that he maybe never have seen before and with these new “heroes” should be interesting and fun. Maybe Blizzard aimed for them with the exact reroll of this brawl. For the veterans it was still a fun experience for a couple of games, but that’s it, the brawl doesn’t have much to offer in terms of fun and replayability.

The Tavern Brawl team had a free week this time, but maybe they are just preparing something big and awesome for the near future. Tavern brawl is keeping Hearthstone fresh and everyone should check it each week, even though it’s a repeat, at least for the pack.